Screenflow and HEVC Video – a Match Not Made In Heaven

Anyone who knows me knows that I am a Manchester United fan and a big part of United’s history is the Munich air crash. In 2001 along with Elaine, we launched munich58.co.uk and for the last few years we have organised the annual fan’s remembrance ceremony at Old Trafford.

Each year we have recorded the event and made the video available via the Munich58.co.uk website and the Munich58 YouTube Channel

This year Elaine recorded the ceremony itself (a mix of songs, poems and prayers) and I recorded the crowd. The plan was to use footage from both cameras in the final video.

So once we were back home, the plan was that we both transfer the video footage from our respective phones to our computers. Then I transfer my footage to Elaine’s computer and using Screenflow she would use her video editing skills to put together an awesome production using both sets of footage. The video would then be uploaded to the Munich58 YouTube Channel

All was fine until we got home and copied the video from our phones onto our iMacs. Because the files were over 2GB, we deemed it wise not to use Airdrop, instead we both used Phoneview – a Mac app that is used to copy files from an iPhone to a Mac using a cabled connection.

I transferred my video to Elaine’s iMac using the file transfer feature in Apple Remote Desktop and she added it to a new Screenflow 7 project on her iMac.

In Screenflow, she dragged the playhead across the video to check it only to find that there was no audio, there was no waveform in the track on the timeline and there was no picture! 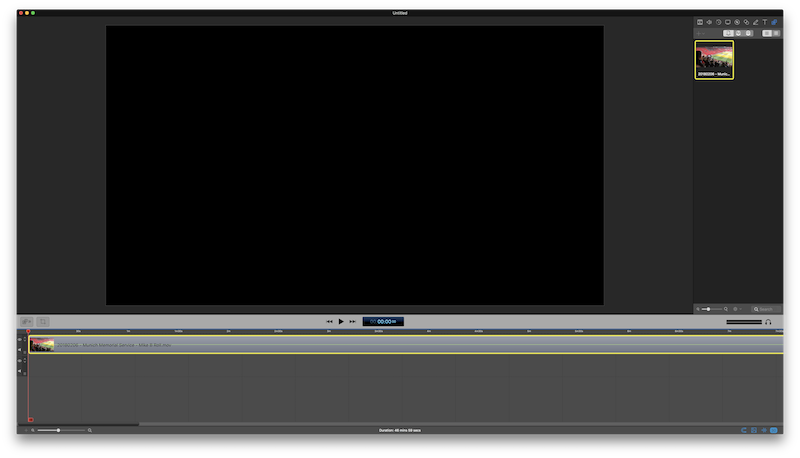 Although we were both using the same version of Screenflow on the same MacOS, we realised that Elaine’s iPhone was on iOS 10 and mine was on iOS 11. Not only that, mine was set to use the new High Efficiency format (HEVC) which is only available in iOS 11.

This is the default setting and offers better compression than H264.

More research was needed. It was then that I found the answer on an Apple KB page…

“When you share HEIF (the new photo format) or HEVC (the new video format) media using methods such as AirDrop, Messages, or email, it’s shared in a more compatible format, such as JPEG (for photos) or H.264 (for videos)”

So I tried again, this time copying the video from my iPhone to my iMac using Airdrop. It was a 2GB file and took around 2 minutes.

I dragged the file onto the timeline in Screenflow, dragged the playhead across the video and hey presto – both the audio and the video were there!

So it appears that screenflow is the problem, not recognising videos in HEIF format. Hopefully they’ll fix this but in the meantime, that’s what I need to do – Airdrop the files.