Running Windows on a Mac

This post is in response to an email I received recently…

Hi Mike. I run a small business and after months of persuasion, I finally bought an iMac. However my invoice and stock inventory database is in Access and I have had to continue to use my Windows laptop to access this. I also have Excel spreadsheets and I use Numbers so I end up having two documents to update. Can you recommend an app I can buy for me to be able to use the Access database on my iMac and also the Excel spreadsheets.

Back in January 2013, I wrote a post about how to access the data that is wrapped up inside an Access MDB or ACCDB file. However I did not address the subject of how to open an Access database on a Mac, something that is critical if you need to run reports and queries as the apps I covered only allow you to access the data in the tables. There is no OSX version of Access so to open an Access database on a Mac you have 2 options…

Boot Camp is built in to OSX (the Mac operating system). Using the Boot Camp Assistant you create a new partition on the Mac’s hard drive and install Windows into it. Once Windows is installed, you can install Access and any other Windows-based programs that you use.

The main disadvantage of using Boot Camp is that you can only run one operating system at a time (OS X or Windows). You have to reboot the Mac in order to switch between operating systems. For more information about Boot Camp, see these support articles on Apple’s website:

Virtualisation software allows you to run Windows on your Mac whilst the Mac is running OS X. Here’s what it looks like on my iMac: 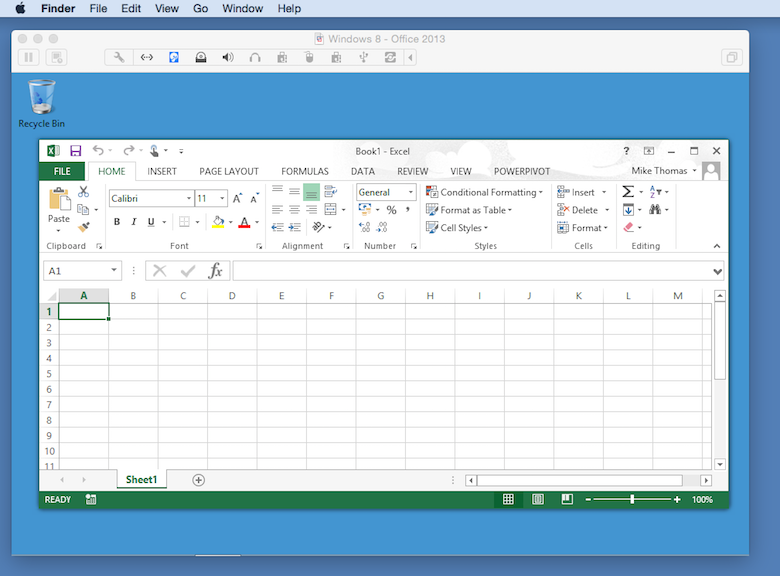 Parallels and VMWare Fusion are the most popular virtualisation software programs. I currently use Fusion and have done for several years although when I first bought a Mac, I got Parallels. There’s not much to choose from between the 2 applications so it really comes down to personal preference.

Once you’ve installed Fusion (or Parallels) onto your Mac, run the program, create a new virtual machine and specify Windows as the operating system. Install your software (e.g. Microsoft Access) in the usual way.

One important point to be aware of is that not only will you have to pay for your virtualisation software (Parallels is about £60 and Fusion is about £50) but you will probably need to buy another Windows licence and possibly another MS Office licence too – unless you are able to use/transfer the licences from your Windows laptop.

There is however a way to reduce the cost and that is to purchase an Office 365 subscription. You’ll still need a Windows licence but for £80 a year you can install MICROSOFT OFFICE on 5 computers (PC’s or Macs) as well as 5 tablets and 5 phones. There are other benefits too such as 1TB of online file storage.

So in response to the email I received:

The Access database and the Excel spreadsheets can still be stored in DropBox so you and your colleagues can access them from there. You can set up DropBox on the Mac and in the Windows virtual machine so that you can access the files from either environment.