Live Radio on your iPad and iPhone

On MacBites episode 53 I reviewed 2 excellent (OK I think I used, or should I say, over-used, the word “cool” during the reviews!) apps that enable you to play live and recorded radio programmes from all over the world on your iPhone and iPad.

The apps in question are TuneIn Radio and Stereolizer. 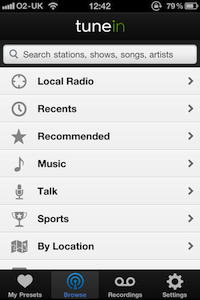 TuneIn Radio, which is available for both devices (as well as Blackberry, Android and several other mobile platforms) has a free version and a Pro version which costs 69p.

The Pro version is ad-free and includes a recorder so you can record your favourite radio show and play it back at any time.

The app boasts a whole range of features including free access to around 50,000 radio stations worldwide, access to on-demand radio programmes and quick access to your favourite stations, programmes and songs via presets.

It has a SKY+ like “pause” feature (which kicks in automatically should your phone ring), can act as a radio-alarm clock, waking you up to your favourite radio station and has a timer facility so that you can record your favourite programme. It also supports “multi-tasking” so that you can leave it playing in the background whilst you use your iPhone/iPad to check Twitter and Facebook and play Angry Birds. These are just a few of the features – there are many many more. 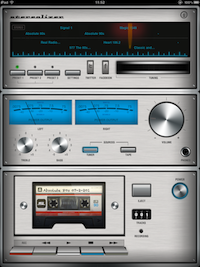 Stereolizer provides access to around 10,000 streaming stations and provides 3 preset buttons that can store 10 stations each. It supports multi-tasking but lacks several of the features that TuneIn Radio has (such as pausing the stream and a timer facility).

However, as you can see from the screenshot, the interface is really really cool. OK, some of the features are there for show, such as the VU needles and the treble and bass switches, but the volume switch works as does the manual tuner, which provides authentic “interference” as you work your way through the tuning scale.

The piece de resistance however is the 1980’s style cassette-deck. Simply tune into a station and click the Record button and watch the cassette reels move round as the station’s audio is recorded. Clicking the Stop button will “eject” the tape and display the iPad’s on-screen keyboard so that you can label the tape. To play back a recording simply press the cassette-deck’s Play button. You can even (and I’ve not tried it), attach a microphone to the iPad and record from it (great for Karaoke apparently!)