Installing Windows 7 in a Virtual Machine

Although I started using a Mac in 2006, I still work in a Windows world so in order to keep my hand in, I decided I’d install Windows 7 – as a virtual machine inside VMWare Fusion, although the fact that I’d agreed to deliver a presentation on running Windows 7 in a virtualised environment for NWIITT was, I suppose, the real impetus for doing the installation.

Before starting the installation, there was some groundwork to be done. I have several virtual machines set up, each one with a different name:

All these machines (or Images as I call them) have Windows XP installed as the Operating System. Rather than starting from scratch with a new VM, I made a copy of “Base” – my logic being that to add some realism to my presentation, most people will be upgrading – either from XP or Vista (gone are the days of the DOS prompt – unless you’re an uber-geek of course!)

For anyone who has never used Fusion, each virtual machine is represented in the OSX Finder as a single file so making a copy of a VM is as simple as copying the file. Once I had a copy of the “Base” VM, I renamed it to “Windows 7” and opened it (in Fusion)

The Windows 7 Ultimate DVD was already in the DVD drive of my MacBook Pro and Fusion was configured to “take control” of the DVD drive. Once Windows had loaded, I opened My Computer and double clicked the DVD to begin the installation process. I worked my way through the first few screens until I was stopped dead in my tracks…

At the point that I had to select which drive and partition to install Windows 7 on, the following message appeared:

I didn’t think that I had any SCSI devices on my MacBook Pro and even if there was, I had no drivers anyway. Frantic Googling of the message resulted in a link to a file on vwmare.com – http://download3.vmware.com/software/vmscsi-1.2.0.4.flp.

Tip: When I tried to download it using Safari, it opened what appeared to be a text file directly in the browser. Using Firefox resulted in a successful download.

The file vmscsi-1.2.0.4.flp is a “virtual floppy drive” file and contains the required driver. 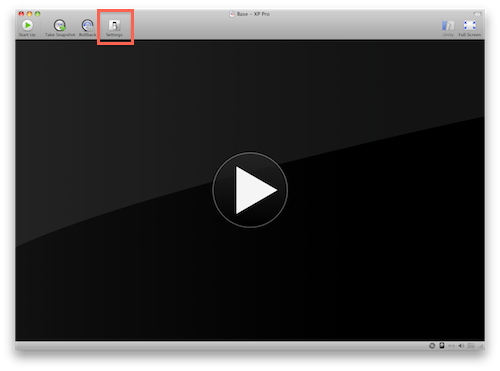 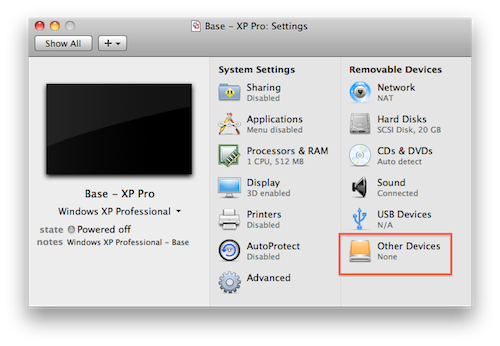 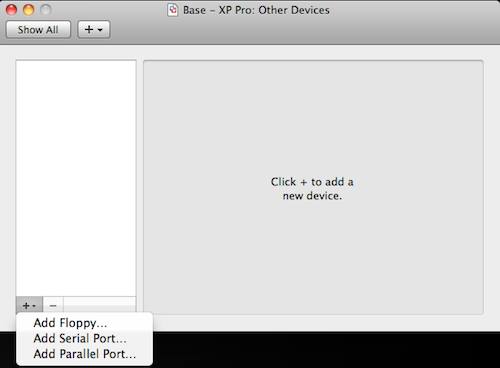 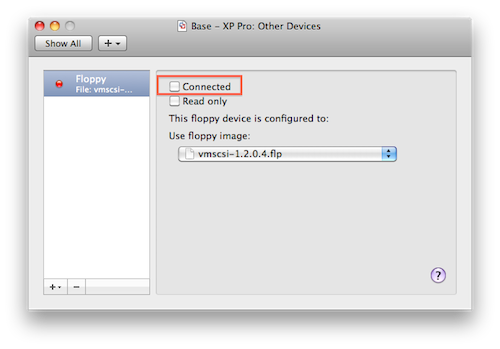 IMPORTANT: Ensure that the Connected checkbox is NOT checked. If it is checked, when the virtual machine boots up, it acts the same way as Windows acts when there is a real floppy disk in a real floppy drive – in other words, it tries to boot from the floppy disk. In this case the “disk” is not bootable, which results in the following screen: 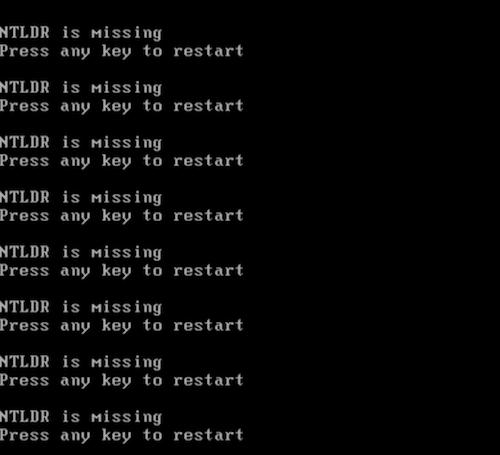 Once the VM has been restarted and Windows XP has loaded, the floppy disk needed to be connected. As before, click the Settings button on the Fusion toolbar, click the Other Devices icon, highlight Floppy in the list of devices and tick the Connected checkbox. 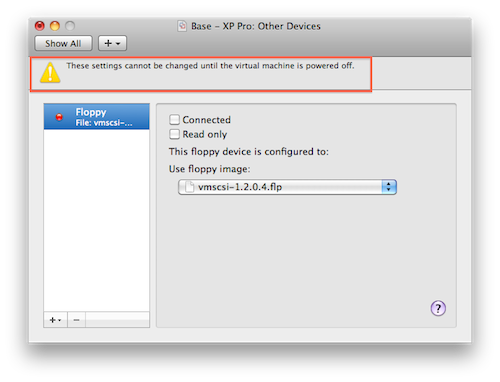 Even though there is a message indicating that the settings cannot be changed until the virtual machine is switched off, the floppy drive is connected without the need to power off so the Settings dialog box can be closed.

At this point the VM was ready for Windows 7 to be installed. The Windows 7 Ultimate DVD was still in the DVD drive of my MacBook Pro so I opened My Computer and double clicked the DVD to begin the installation process. Again I worked my way through the first few screens. When I got to the point where I had to select the location of SCSI Controller driver, I clicked Browse and selected the A: drive. Windows duly found the Controller and the installation continued.

40 minutes later I had successfully installed Windows 7 on my MacBook Pro.

The next problem came when I tried to activate Windows as I found that I had no Internet connection. Fusion was configured correctly (to use NAT): 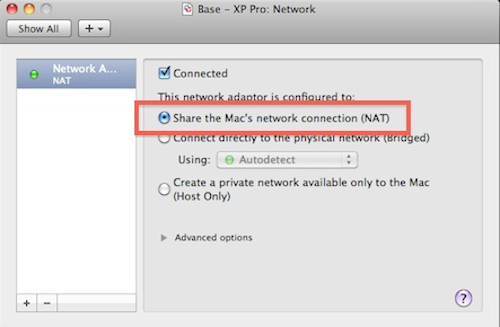 However, the Windows 7 Device Manager indicated a problem with the Ethernet Controller: 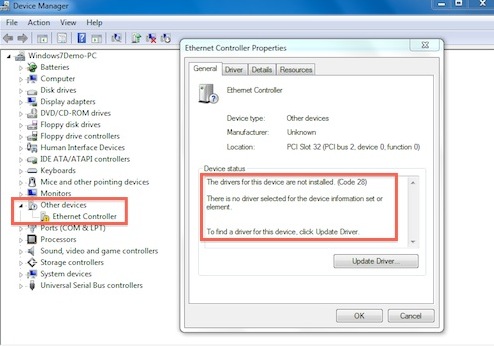 I found the solution here. In a nutshell…

With the VM shut down, open Finder and find the actual virtual machine file (the .vmwarem file). Right click on it and select Show Package Contents. Inside the Package, find the file with a .vmx extension and open it in a text editor. Add this line

I added it at the end of the file

I restarted Windows and hey presto, I had a working network adapter and an Internet connection. 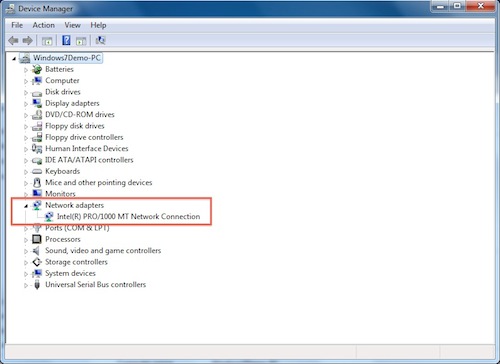