Following a legal agreement between Microsoft and The European Competition Commission, from March 1st 2010, Windows users across Europe are able to install the web browser of their choice, rather than having Internet Explorer as a default.

Although I’ve been a Mac user for 4 years, I still use Windows at work (where I’m forced to use IE7) and at home, where I have virtual machines set up on the Mac to run Windows, I run Firefox. Even when I was a “real” (as opposed to virtual) Windows user, I still preferred Firefox or Opera. Not only were these browsers more secure, but they were amongst the first to introduce features such as tabbed browsing and saved sessions.

“But hang on”, I hear you say, “I’ve always been able to install other browsers on Windows”. Yes but this is different. I can drive a car but I’m no mechanic. In the same way, there are millions of PC users who want to be able to turn on their machine and “get on”, whether it be emailing, surfing, writing a letter, or whatever. For “technical tasks” like installing software, they want to be prompted, rather than having to go to a website, download an exe file, be advised that they should only run exe files from trusted sources, etc etc.

Tonight, when I fired up my Windows 7 virtual machine, Microsoft’s Browser Choice software ran automatically. A large message box proclaimed “An important choice to make: your browser.” It went on to advise that it had unpinned Internet Explorer from the Taskbar and removed the shortcut to it from the top of the Start Menu. 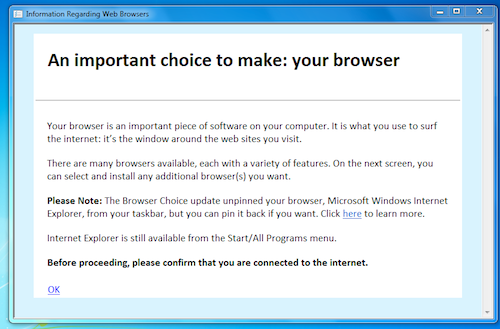 When I clicked OK, I was presented with another large dialog box that contained as list of browsers. For each browser I can “install” and “learn more”. 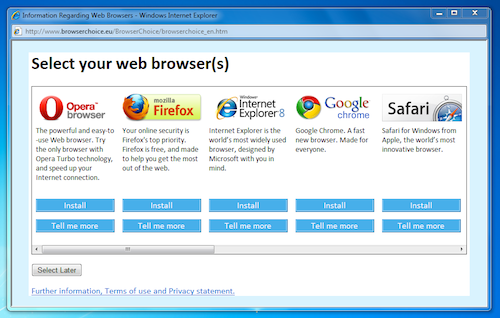 I opted to keep it simple and just install Firefox.